Distance Healing vs. In Person Healing 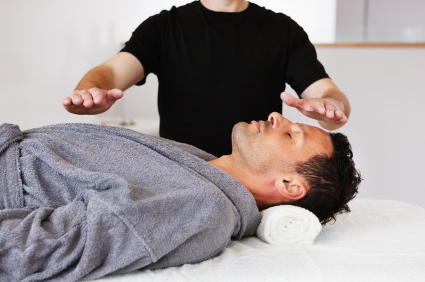 When using energy healing modalities such as Reiki, it is not necessary to be in the same room or even the same state or country for either the healer or the client!

I realized this early on, in fact the first time was during my first Reiki training class when we did a distance healing.

I decided to use the opportunity to work on my husband who was at home that day. He had been suffering with a chronic illness and had been to numerous doctors, having a lot of testing done and no one could seem to find the problem. It was a mystery as to what was causing him to experience severe symptoms for over a year.

I was doing the hand placements along the chakras as I had been taught the previous days in class and all of a sudden in my mind’s eye I saw a black and white object spinning towards me. I asked out loud (not knowing who I was talking to and surprising myself in the process) “what is that?” I actually heard “that is a pancreas”.

Wow! Such a clear vision and a very clear and concise answer! I realized at that point that I had been able to “see” and “hear” things my entire life but never really used these gifts in a productive way.

So anyway, I finished up the session and the day in class and went home. I knew nothing about the pancreas and went online to see how this could have anything to do with what he was experiencing on a daily basis in his life. I went to Wikipedia after looking up “pancreas” and was scrolling through and reading. All of a sudden there is an image on the right hand side of the page. A BLACK AND WHITE IMAGE! And it was EXACTLY what I had seen during the distance healing. I started crying I was so excited! My guides made it very easy for me to see that this was true and not something in my imagination!

Since intuition and imagination mimic each other, when developing your intuition to use on a daily basis or in your work it is important to be able to know how to tell the difference. That was the biggest lesson I learned that day.

I read all about the pancreas into that night and still have no clue why this was the basis of his issue. But none of that even matters. This was over 4 years ago and he has not had a single symptom since that energy healing. His symptoms were very measurable and obvious so we were able to see the miracle that had occurred.

Needless to say, my husband is one of my biggest fans!

A few months later I took another version of Reiki training and during an attunement, while in a meditative state, I saw three images flash in my vision in a slideshow type way.

The first image was a lotus flower, the next was a baby in a fetal position and the third was an erupting volcano. All three visions were a deep red, both the image and the background. It was like I was looking at the images through a piece of flowing red chiffon fabric blowing in the breeze. The slideshow kept replaying over and over until the attunement was done and I opened my eyes. I thought this was really strange and mentioned it to the class as we were sharing after we were done. None of us couldn figure out what it meant at the time.

Class was over at 6pm and as I went to turn my cell phone on, my daughter was calling in. I answered and she told me not to worry, but she had been at the hospital since noon and they were prepping her for surgery.

She told me that she had an ectopic pregnancy and that they were doing surgery to prevent rupture of her fallopian tube.

So, basically as my daughter was being diagnosed, I was seeing the image in my mind of what she was experiencing.

I don’t think I need to explain each image – they are self-explanatory in my opinion.

I did not know my daughter was pregnant and I did not connect the images to mean anything until after the fact. Now I am much more in tune and aligned with my intuition and I probably would pick up on that right away, but I’m actually glad I couldn’t at the time. “Don’t worry mom…” I love that she started the conversation with that, she knows me so well!

What I am saying with these two examples is that energy is energy and it is not constrained in space or time.

If you are in Australia I can connect to your energy as easily as if you were lying on my table in front of me.

I love doing in person intuitive energy sessions, but most times that is not possible due to logistics.

So don’t hesitate to book a session if you are not located in Seattle as I am. It works the same either way every time!

This site uses Akismet to reduce spam. Learn how your comment data is processed.

Are You Struggling with Depression or Anxiety?

This FREE audio, meditation, and PDF booklet will show you how to quickly overcome the debilitating effects of Depression and Anxiety